A local's guide to Truro, Cornwall

Looking  for an approachable Estate Agent to help buy or sell your property in Truro? Or just looking for honest advice from a friendly expert who knows the area? Whiting & Barlow are on hand to offer support for all of your property needs. Having lived and worked in Truro for many years, the Team can provide you with inside know-how that only a local can. 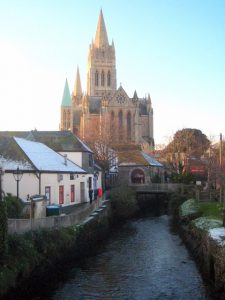 Whilst many will know that Truro is Cornwall's only City, it's not actually the County's largest town by population, which only adds to its charm. Yet it's undoubtedly the central hub and main destination for employment, retail and sightseeing; with a wealth of amenities, a thriving independent business scene and a close-knit community feel.

Framing the skyline are the sixteen iconic arches of the Truro Viaduct, originally built by Isambard Brunel in 1859, which still carry today's railway. It stretches an impressive 405 metres (1,329 feet) and connects The Cornish Main Line, which runs West to Penzance and East to Plymouth, and then onto Paddington, London. 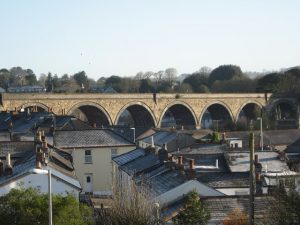 Truro really is in the heart of Cornwall, with easy access to the rest of the county via the main roads of the A30 and A39/A390. This makes it the perfect base for day trips, allowing you to comfortably reach the most Westerly tip of Lands End, and most Southerly reach of The Lizard, in under an hour's drive. 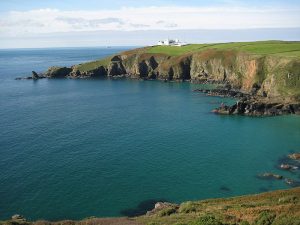 If bike rides are more your thing, the Cornish Way National Cycle Network runs through Truro and branches into 3 distinct routes. The paths run through nature reserves, old railways, quiet country lanes and alongside riverbanks. If you're up for it, the trails can take you to the coast and as far as Lands End or Bude! 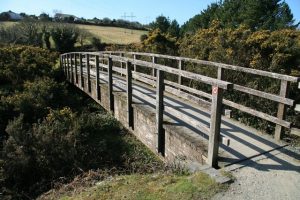 Closer to home there are more local beaches of Perranporth, with miles of sand, surf, & dunes, and the peaceful cove of St Agnes, a stretch of coastline littered with old mines - both a mere 20 minute car journey to the North. Just a half an hour's drive to the South, you'll find yourself at the Roseland Heritage Coast, with hidden creeks and rock pools in the sheltered bay. So whilst inland, Truro couldn't be any better positioned for accessing Cornwall's famous coastline. 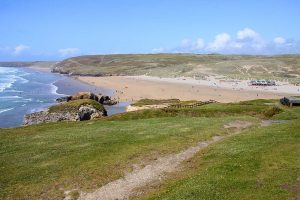 There are also plenty of local walks from Truro itself, such as in and around Coosebean Wood and The Enchanted Trail; a lovely community project, with an ever growing collection of Fairy Doors, where children are encouraged to leave messages for the magical creatures that inhabit the tree trunks.

Flowing through Coosebean is the River Kenwyn, which carries on into Victoria Gardens (a 19th century hidden gem, full of established exotic plants and ornate water features) before it seemingly disappears beneath the city centre itself. Similarly, the River Allen that runs from the north of Truro, also suddenly vanishes under the Cathedral, before the two reappear again at the harbour office, and merge together to form the Truro River. 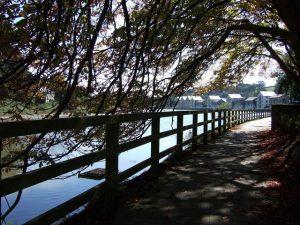 At Boscawen Park, follow the River for a mile and you'll come to Malpas, a very pretty village in a designated area of outstanding natural beauty. The scenery here is picture perfect, with views out towards tree covered banks and the tranquil setting for the ever popular Heron Inn. 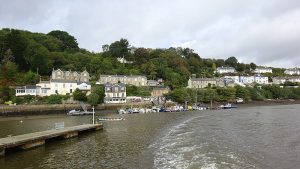 It's hard not to talk about Truro and not mention the Cathedral, with its green tipped, 250 foot tall spires that tower from the middle of the City. The historic landmark is an ever prominent presence and a very desirable backdrop for many of the properties here. 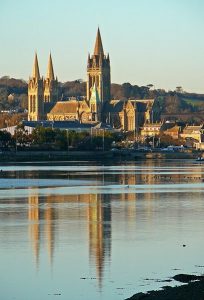 The Georgian architecture of the Town centre is often said to mirror the look found in the City of Bath, with the likes of Lemon Street, and its distinctive use of Bath Stone. You'll also find Victorian Villas, late Regency Townhouses and bricked terraces a plenty, which only add to Truro's allure and sense of yesteryear grandeur. 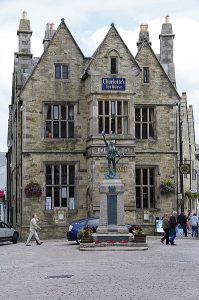 Take Boscawen Street for example, which is nestled directly in the centre of Truro and paved in ancient granite. The cobbles here flood the wide high street, spilling out towards the smaller nooks & crannies, that snake their way throughout the city and its network of side streets; such as the aptly named 'Squeeze Guts Alley', a tight zig zag of a corridor that connects St Mary's Street and Duke Street - if you're able to find it that is! 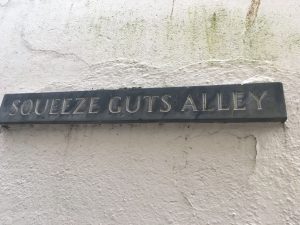 As the County Town, Truro is the destination for shopping in Cornwall. Expect to find all of your favourite names, such as Marks & Spencer, Waterstones, Boots, HMV, Clarks, and Primark; plus an abundance of independents like Michael Spears and Uneeka, as well as boutiques including Lakin & Boone, Clique, and Busby & Fox. 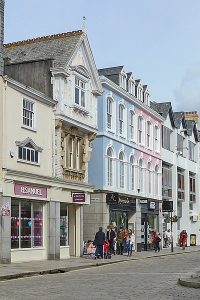 The indoor arcade of Lemon Street Market hosts a flourishing collective of small businesses, all centred around impressive tree ferns that fill the contemporary and airy space. Whilst the more traditional Pannier Market, which was once used to carry out repairs on Spitfires in 1934, is home to an wide array of businesses; all of which add to the variety and truly make Truro's high street one of a kind. 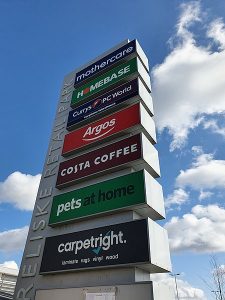 There are the out of town retail parks of Treliske & Newquay Road, hosting the usual big names, such as Dunelm, Hobbycraft, The Range, Currys, Pets at Home, Argos, and Homebase. Plus Truro is also home to the largest supermarkets in Cornwall, with a great Sainsbury's, Tesco, Aldi, and impressive Waitrose with 'Great Cornish Food' on site - an independent butcher, fishmonger and deli.

Things to do in Truro

If you are looking for something to do in Truro, you’ll be spoiled for choice. It’s the ideal place for all ages, with an array of options available whatever the weather. The Royal Cornwall Museum is a great idea for a rainy day, showcasing a splendid collection of artefacts, fine art, sculpture, fossils, and local curiosities, with highlights including ancient Egyptian Mummies and a famous collection of precious minerals. 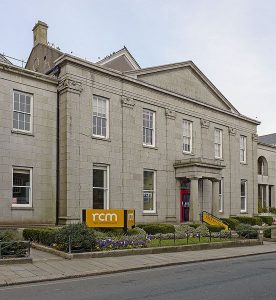 The Plaza Cinema is also a delight. Built in 1936, the Art Deco building is iconic to Truro, and stands centre stage on Lemon Street. As part of a small independent chain, it has 5 screens that utilise modern technology, with plush comfortable seating, whilst still oozing history and a retro gone back in time feel. 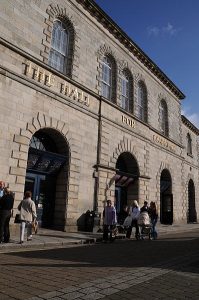 Just around the corner, the Hall for Cornwall is the Counties go to venue space, hosting sell out musicals, comedy nights, and musical acts. Autumn 2021 marks the reopening of the theatre, following a multi million refurbishment, with improvements to the auditorium, and the addition of exciting new studio spaces. Expect the biggest names to come flocking to Truro very soon.

Places to Eat in Truro

Cornwall has a reputation for good food, and Truro is by no means an exception, boasting a thriving selection of independent restaurants. Get your burger, hotdog & fries fix at Hubbox, or if you’re seeking seafood try Hooked!, or if you fancy both, go for Sam’s in the City! There are also of course a great range of fish & chips shops scattered across the town - our favourite is Charlie’s.

For a taste of the Orient visit Bao Bites for pillowy soft goodness, or Zen Noodle Bar for the likes of katsu curry, dumplings and Korean BBQ. Chorley's has a really unique menu with South African cuisine offering peri-peri flavours and specialities you won’t find anywhere else, whilst Habaneros Burrito Bar is an amazing lunch stop for Mexican.

Let’s not forget the award winning The Cornish Vegan, as well as Pollen, just some of the terrific Vegan spots along Kenwyn Street. Also expect to see nationwide favourites ASK Italian, and Pizza Express, which occupies the historic Coinage Hall; and just a stone's throw away is the charming Truro Lounge, always a great spot for brunch.

We truly love our city, and it was really exciting to learn the ‘Truro Town Fund’ news that was confirmed in 2021. It coincided with a visit from Prime Minister Boris Johnson, who announced “The £23.6 million investment will help Cornwall’s capital to become a connected river city and become a modern economic, cultural and green capital for the residents and wider community by 2030.”

The project is split into 6 parts, aiming to breath new life into unused city buildings, improve the Harbour, Lemon Quay & Boscawen Park, create a new Community Hub, as well as The Hive at Pydar, a new Recreation Hub, all whilst improving Green Transport - “The vision is to breathe new life into the waterfront by creating new business spaces, green event areas, promenades and new ferry terminals.”